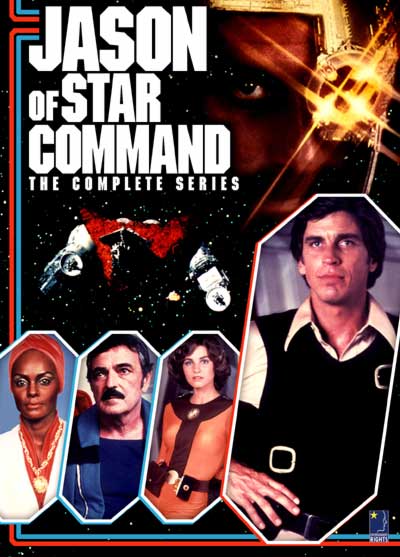 Los Angeles, CA - BCI Eclipse, a Navarre Corporation Company, and the UK's leading global media company and underlying rights owner, Entertainment Rights Plc ("ER") announce the release of the live action series "Jason of Star Command." The complete series will be available on DVD for the first time and will be released on May 8th at a suggested retail price of $29.98. The 3 disc, 28 episode set is highlighted by a series of special features including a brand new documentary and a special effects commentary track.

"The anticipation of this long awaited release has been nothing short of spectacular" said Jeff Hayne, Director of Acquisitions, BCI. "JASON OF STAR COMMAND holds a place in history as one of the most elaborate and special effects-heavy Saturday morning TV shows ever created, and both its cast and visual effects crews had worked on Star Trek and Star Wars in the past, and numerous famous genre films since then. Fans will be especially pleased with the terrific DVD set BCI has put together, which is loaded with stellar special features."

Working from within a secretive section of Space Academy, a daring soldier of fortune named Jason joins with his friends to combat the sinister forces that conspire to dominate the stars. Jason is aided on his missions by Commanders Carnavin and Stone, computer expert Nicole, strong alien Samantha, eccentric scientist Dr. E.J. Parsafoot, and two robots, Peepo and the portable W1K1. Together they face the evil machinations of Dragos -- the self-proclaimed "Master of the Cosmos" -- and his alien minions aboard the Dragonship.

JASON OF STAR COMMAND was a hit when it aired on Saturday mornings, beginning in 1978 on CBS. The most expensive children's show on television, the series utilized sets and props from its predecessor, SPACE ACADEMY, and featured veterans of Star Trek among its cast, plus special effects personnel who had created the visuals of Star Wars! With its action-oriented serialized plots and a memorable space-age villain in Dragos, JASON OF STAR COMMAND was a hit for two seasons, and entertained audiences worldwide in syndication thereafter.

Producing the special features, documentaries and all of the extra content is entertainment writer Andy Mangels, a best-selling novelist, and author of Animation on DVD—The Ultimate Guide.


Return to Toons on DVD page